The SA vehicle market is under tremendous pressure as the support for big-ticket credit-financed consumer spending weakens. The post-2009 reflation of the car market bubble is unwinding rather painfully and is a bearish structural and cyclical signal. If past cycles are any guide, it is quite possible that SA will have a ±25 000 unit per month car market in 2016/17. The signs are even more ominous if one uses the pre-2005 trend, which warns of an even larger downside correction in sales. 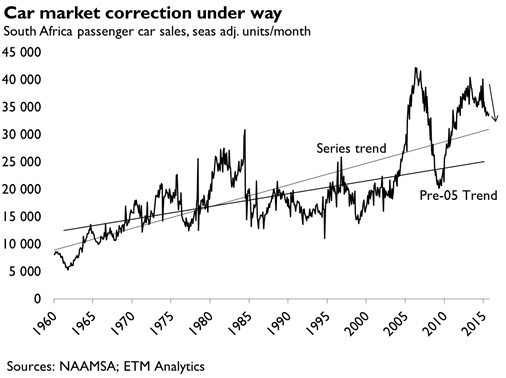 The SARB hiked interest rates in July in a move that seemed cognisant of the need to prevent excessive rand weakness and inflation risk. Credit ratings returned to focus after the unexpected withdrawal of Fitch from the South African market. This decision was followed by a ratings warning by Fitch, a credit rating downgrade of Brazil by S&P and warnings from credit rating agencies that fragile EMs with external imbalances, like Brazil and SA, are vulnerable to further ratings actions.

SA retail sales got a reasonable lift toward the back end of 2014 and early 2015 as oil prices fell and inflation slowed. It seems like the best of that patch has passed. Retail sales have been flat since February 2015 and the growth trajectory looks to be turning lower again, continuing a slow declining trend since 2011. 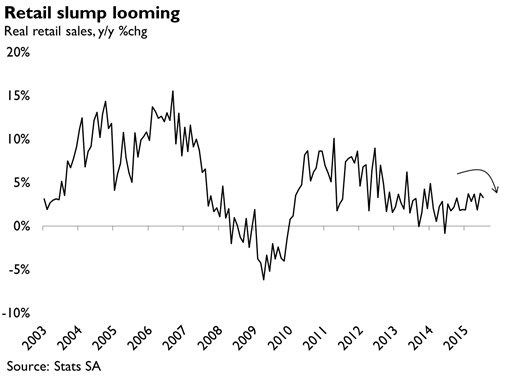 The rand fell to its weakest level on record on a trade-weighted basis in September. The SARB July rate hike, in the face of soft inflation and weak growth, suggests the bank is becoming more focused on the rand and capital outflow risks than the usual growth/inflation trade-offs. The SARB may finally be recognising that the risk to growth of not hiking might outweigh the risk to growth of hiking. 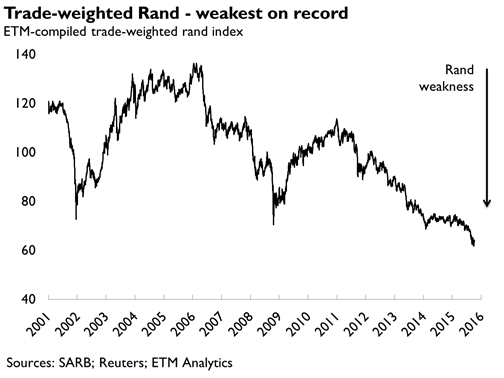 The ETM rand fragility index edged slightly lower in Q2 2015 – but is still marked at much higher levels than prior to the 2008 rand crisis – and the rand is one of the most fragile amongst the major emerging market currencies. Twenty five or even 50bp more worth of hikes are unlikely to be enough to stem rand weakness and may even initially elicit further depreciation as the market bays for more.

The car market continued to haemorrhage in September. NAAMSA data showed passenger vehicle sales were down 4% since the start of the year and 8% off the 2014 average. We use car sales as a key consumer sector barometer and the looming trends are worrying to say the least. After the 2009 market correction, the SARB’s easy money policy and a government fiscal debt binge helped the market almost all the way back to the 2006 bubble levels.

That now appears to be in the process of a sharp and painful correction back to and then likely below the long-term trends. If past cycles are any guide it is quite possible SA will have a ±25 000 unit/month car market in 2016/17.

Many underpinnings of this consumer spending cycle are weakening. Bank credit to consumers has slowed, the state wage bill is slowing, general employment conditions are poor, the rand is weak, and the SARB may be forced to hike rates to buffer the currency. The decline in the BER consumer confidence index in Q2 was a shocker and we know that households do not readily take on big credit-financed items when confidence falls so sharply. Look out below.

Corporate South Africa is not in good shape and it appears to be getting worse. Structurally companies are hamstrung by uncertain energy supply, hostile labour relations and growth-restrictive red tape.

But cyclically, too, whatever relief may have been afforded by softer commodity prices on the input side has been offset by rand weakness. As a result non-state, non-financial sector pre-tax profit margins according to Stats SA remain around 7% with no sign of lift-off. Comparing margins to the currency is also revealing. During periods in which the rand weakens faster than the rate of profit, one expects corporations to find it difficult to source capital imports.

Cash flow is anecdotally very tight in corporate SA right now, but we can see evidence of this in strong corporate overdrafts as companies go to the banks cap in hand to finance dollar-denominated imports. Another bout of rand weakness and slowing demand would make operating conditions extremely tough moving into 2016.

Recession risks have risen and 2016 is shaping into another sub-2% growth year. 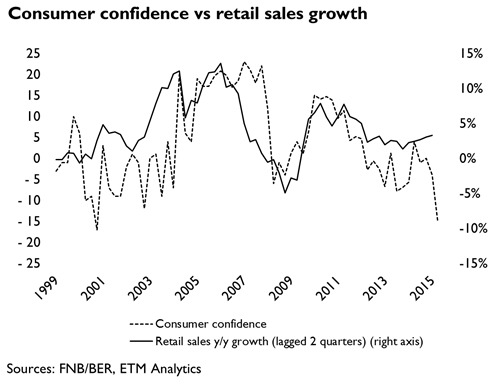 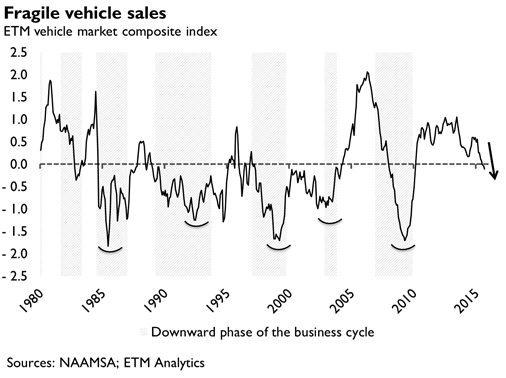 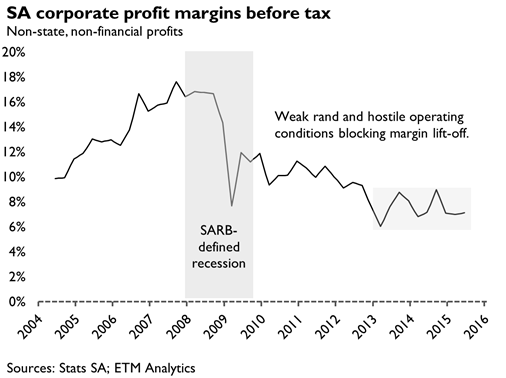 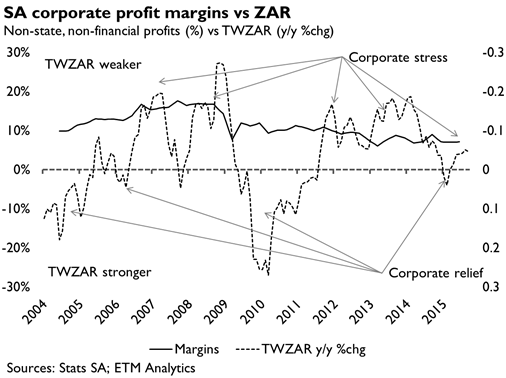