Two of the most important documents published by government are the February National Budget Review and the October Medium-Term Budget Policy Statement, known colloquially as the mini budget. Though rarely read in detail by non-financial, non-economic audiences, these documents are of considerable importance. In them government’s spending plans and forecasts for the medium term are outlined at length. Even though few people read these documents, the far-reaching consequences of government actions outlined therein affect the lives of all people in South Africa.

When one does venture into the pages of the budget documents one is faced with a lot of technical jargon. Yet, in spite of this, it does not take long for one macroeconomic measurement to emerge as pivotal. This is the measure of gross domestic product (GDP): an indication of the financial value of all goods and services produced in an economy. Ratios based on GDP numbers serve as widely accepted benchmarks closely followed by local and international investors and observers of government finances such as credit ratings agencies.

Debt levels, current account deficits, tax revenues and state expenditure are frequently expressed as a ratio or percentage of GDP. Debt-to-GDP is but one example of such a ratio. These ratios comment on the size of a government’s budget items in relation to a country’s GDP. This allows for comparisons to other countries as well as evaluations of changes over time. The health of government’s future GDP ratios, such as debt-to-GDP, is highly dependent on favourable GDP growth. Generally, adequate GDP growth is a prerequisite for government budget expansion.

To illustrate this point: South Africa’s gross government debt levels were recorded at nearly 47% of GDP for FY2015 in the October 2015 mini budget. The nominal debt is projected to grow from R2 trillion in FY2016 to R2,6 trillion in FY2019. Year-on-year growth calculations suggest that gross debt will increase both nominally and in inflation adjusted (real) terms. In spite of this, the Treasury argues that gross debt as a percentage of GDP will “stabilise” over the medium term, never exceeding 49,4% of nominal GDP, thereby sustaining the debt-to-GDP levels below a cautionary psychological barrier of 50%.  Since gross government debt is projected to grow at a specified rate, the projected “stabilisation” relies on compounded nominal GDP growth nearing 8,6% over the medium-term forecast period.

Declining GDP growth will worsen this ratio. In the worst case, if GDP contracts significantly year on year, a sudden shock in the ratio of debt to GDP would be the result, leading to chaos in government finances. For example if an economy has a GDP of R1 000 in year one with R500 worth of government debt, the debt-to-GDP ratio is 50%. Let‘s say in the following year government debt grows by 5% to R525 but GDP contracts sharply by an exaggerated 2% to R980. Now the debt-to-GDP measure worsens significantly to nearly 54% of GDP.

Following on the 2008/2009 recession Greece faced exactly such a dilemma. Its GDP contracted significantly. Excessive government debt was revealed through significantly worsening debt-to-GDP ratios. This raised the eyebrows of international lenders and investors, setting off a debt crisis. From this it should be evident that governments with significant levels of debt, which includes the South African Government, would be greatly incentivised to bring about nominal GDP growth, even if that growth is attained in large part through inflation.

If local GDP growth occurs according to the National Treasury’s expectations nominally at 8,6% compounded per year, the present proportions of the South African government’s gross debt to GDP should remain below 50% of GDP.  Yet, current economic headwinds in a weak economy suggests that real GDP growth targets mentioned in the latest 2015 mini budget are unlikely to materialise. This is supported by the Treasury’s record of macro-economic predictions, which were generally overoptimistic since 2008 (see the following graph). 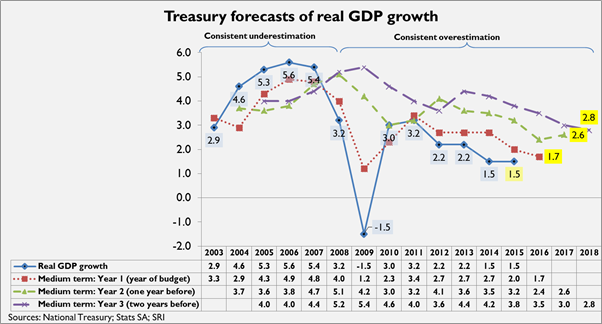 However, disappointing real GDP growth does not leave a government powerless in the face of a weakening economy. Governments still have an ace up their sleeves; the ace of inflation. In previous editions of this report we argued that most indebted governments would prefer an inflationary economic environment. Such an environment allows a government to settle or restructure older debts, incurred during a time when a currency was worth more, with watered down currency.

Adding to the previous discussion on inflation, we contend that inflation can also obfuscate important GDP ratios, leading them to appear better than they actually are. To illustrate, let’s assume a government plans to increase its gross debt by 10% year on year, but seeks to stabilise a level of debt-to-GDP at 50%. In this example GDP has to grow nominally by 10% per annum in order to absorb the growth of debt. Yet nominal GDP growth consists of both real economic growth and an adjustment for inflation. In the simplified example, the 50% debt-to-GDP target in year two can be attained by either growing the economy in real terms or by creating inflation, or a mix of the two, as the following table illustrates. 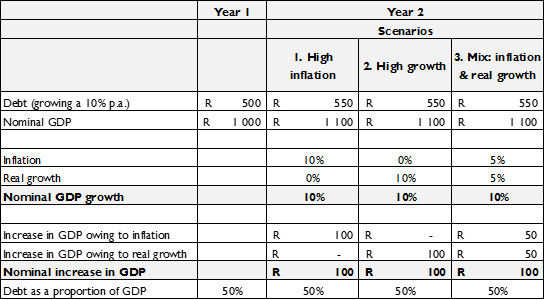 In all three of the year two scenarios outlined in the table above, nominal GDP increases by an adequate proportion to absorb the growth of government debt at 50% of GDP. Inflation in this example acts to allow state debt to increase without leading to an observed worsening of debt-to-GDP ratios.

Unfortunately, someone has to pay for the government’s inflationary obfuscation. Scenarios such as one and three – representing a figurative high and moderate inflation scenarios – will be damaging to the majority of people, because inflation effectively steals purchasing power out of their pockets. Scenario two – representing high actual growth – will be beneficial, increasing people’s wealth in general.

This means that relative changes in nominal GDP ratios over time are not telling the entire story. It also means that different countries with similar debt-to-GDP levels may have reached those levels in different ways, either through inflation or through real economic growth, or a mix between the two. Consequently, changes in the levels of debt-to-GDP over time need to be carefully scrutinised.

Applied to the present situation in South Africa, the October 2015 mini budget suggests that the medium term “stabilisation” of government debt will happen mainly through high inflation feeding into nominal GDP. CPI inflation is already projected to reach the upper band of the South African Reserve Bank’s (SARB’s) inflation targeting range of 3% to 6% soon. In the face of even weaker real growth forecasts, the incentive for government to contemplate further inflationary policies may be a likely consequence. We can expect to hear more talk about “exogenous shocks” and “escape clauses” in relation to the SARB’s inflation targeting framework soon.

Inflation, in this scenario, can lead to debt-to-GDP levels appearing stable. Unfortunately, government debt stabilised on the back of high inflation is not something that ordinary people who are significantly harmed by the effects of inflation should celebrate.