Only 1,1 million to 3,3 million taxpayers propping up government spending

As the South African government is being increasingly squeezed between its inability to rein in its spending and its ever-increasing debt burden, it is not surprising that this pressure is being rerouted to the taxpayers in South Africa. This has been happening for a number of years now and was very visible in the most recent government budget, wherein all but one of the marginal personal income tax rates were raised by one percentage point.

Only one in ten to one in thirty adults in South Africa pay significant amounts of tax. This, in addition to the South African government’s hostility to private enterprise and employers in general, has created a disconnect between government and those who fund its operations. The South African government appears to want to keep the tax base from growing, while at the same time it celebrates the numbers of people who are kept dependent on social spending, including taxpayer-funded schooling, housing, water, electricity, healthcare and grants. Instead of focusing on allowing all people the freedom to add more value through private initiative, government seems intent on redistributing the little that is created each year, while destroying much of it in the process.

Who pays which taxes?

To determine the actual number of taxpayers the different types of taxes first have to be considered. According to the latest available figures – those for the 2013 tax year – 34% of the government’s national tax revenue came from personal income tax. More than 26% was value-added tax (VAT), while company tax was responsible for nearly 20%. The fuel levy and customs duties (import and export taxes) each added another 5%, while the remaining tenth came from various other taxes like excise duty on liquor and tobacco and the so-called environmental taxes.

Consider company tax as an example: this tax is not actually paid by companies. A company only exists on paper and paper does not pay taxes. In practice, company tax is paid by the stakeholders in the company – the people who own the company, work for it, and even those who buy its products. These people are largely the very same people who pay personal income tax, as they are shareholders, employees and consumers with buying power. When it comes to import duties, the fuel levy, and especially VAT, the distribution is slightly more inclined towards those who do not earn enough to have to pay personal income tax. However, the bulk of these taxes is still paid by the people who have the most buying power – the group that pays personal income tax.

It is not possible to determine exactly who pays how much of each specific type of tax, but it is a reasonable premise that a direct relationship exists between the amount of personal income tax a person pays and the amount that taxpayer pays in other taxes. When analysing the known facts concerning the payers of personal income tax, the analysis therefore provides information about more than just one third of the taxes the South African government collects.

Who paid personal income tax in the 2013 tax year?

Moving the cut-off level to a taxable income of R200 000 per year leaves 2,2 million taxpayers who paid about 85% of all personal income tax, amounting to R234 billion. Lastly, considering only those taxpayers with a taxable income above R300 000 per year, one is left with about 1,1 million people who paid about 69% (R191 billion) of the total personal income tax take in the 2013 tax year.

In the year of analysis, there were about 33 million adult people in South Africa. The 3,3 million people who paid 93% of personal income tax constitute only one in every ten adults in the country. The 1,1 million people who paid nearly 70% of all personal income tax are only one in every 30 adults. On the shoulders and wallets of this small band of one-in-ten to one-in-thirty people rests the burden of the South African government’s spending.

As the South African government’s expenditure is highly redistributive in nature, this 1,1 million to 3,3 million strong group receives very little in return for the taxes they pay. Allowing this small group of people who can look after themselves to grow through free enterprise should be the South African government’s priority, not an unsustainable redistribution policy which keeps people dependent on taxpayers through state expenditure. 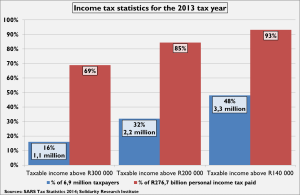