Job and wage security on the decline for almost six years.

Job and wage security remained weak in the second quarter of 2016, caught up in a labour environment of declining job and wage security that has lasted for almost six years since 2011. This is according to the quarterly Solidarity ETM Labour Market Index (LMI), compiled by the trade union Solidarity and ETM Analytics, and released today.

The LMI, an index of employee confidence, labour affordability and the ETM Business Cycle Index, has increased marginally from an upwardly revised 41,2 in Q1 2016 to 42,1 in the second quarter of 2016. In terms of the LMI, 50 is the break-even level between rising and falling job and wage security.

Please note: The index forms part of the latest edition of the South African Labour Market Report. In this issue topics such as so-called Scandinavian socialism, South Africa’s weak capital formation since 2007/08 and inflation are discussed. It also includes a wider macro-economic overview. 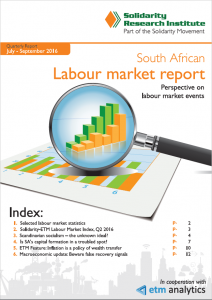