Over recent years South African political leaders often argued that an overvalued currency was a key factor restraining the SA manufacturing sector. There is very little evidence to support this view. On the contrary, the currency remains a crucial structural impediment to any sustained improvement in economic activity, particularly for manufacturers who overwhelmingly capitalise with imported foreign machinery. 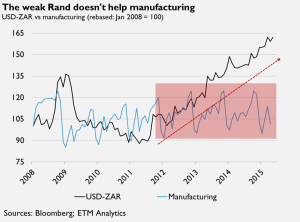 Nersa rejected Eskom’s application for an additional 12.6% tariff increase. While the decision to refuse Eskom’s request for an additional electricity tariff increase may provide the SARB with a short-term excuse to avoid much-needed rate hikes, it does not substantively change the view that the SARB needs to hike interest rates. Critically, the rand and financial market stability are much more important factors through this cycle and in this regard the pressure is on the SARB to protect the rand.

The ETM BCI ticked into stabilisation territory in Q2 2015 on the back of a soft recovery in money supply growth, moderate inflation and a slight rise in household debt to disposable income. These factors all appear unsustainable and are not expected to gather much momentum over the coming months. Nevertheless the soft business cycle recovery is evident in elevated tax receipts in H1 2015, resilient retail sales and a much higher than expected BER manufacturing PMI in June. 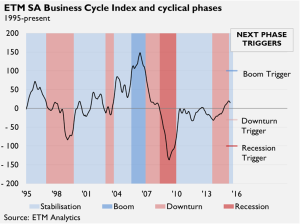 SA requires a more noticeable and sustained increase in real interest rates in order to rebalance the economy and lay the groundwork for a material business cycle recovery. The recent correction higher in real rates (repo less broad price inflation) is a long way off previous cycles. 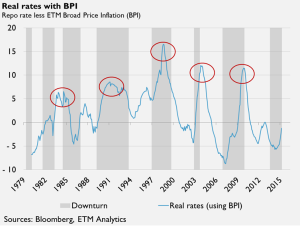 The trade-weighted rand fell to its weakest levels on record over recent months, highlighting the structural underperformance of the currency. The rand is also one of the worst performers amongst the Emerging Market region. The rand and its fragility are expected to become much more important features of SARB monetary policy over the next year than merely CPI inflation. Yes, the pass through from rand weakness into CPI is soft but the extent of rand fragility indicates that further currency weakness resulting from sharp capital outflows is a real cyclical threat. The ETM rand fragility index is currently marked at much higher levels than prior to the 2008 rand crisis and probably still needs to precipitate further rand weakness before depreciation elicits sufficient robustness. 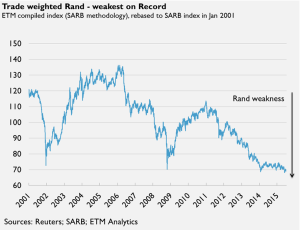 Retail has been resilient in H1 2015. Softening domestic inflation is a major contributor towards this cyclical recovery but there has also been a degree of household balance sheet repair taking place. There are however constraints being placed on the sector from inflation in certain consumer categories, weak economic growth, unemployment and indebtedness. In fact a decline in the FNB/BER consumer confidence index is usually well correlated with retail sales and suggests softer retail sales growth is looming over the coming months.

SA exports have received a slight boost from the cyclical economic recovery taking place in Europe and the US. Recovering export growth combined with a fall in the import bill, on account of a decline in global energy prices, is expected to feed back into a narrower current account and trade deficits over the coming months. These marginal improvements must however be balanced against the overwhelmingly negative outlook for corporate SA.

Eskom, the weak rand and still weak global economic growth are the major hindrances. While Europe and the US are recovering slightly, China is the real underperformer of late. China is SA’s biggest trading partner and growth there has weakened even more than Chinese authorities anticipated. Chinese imports of SA goods have contracted as much as 40% y/y over recent months. 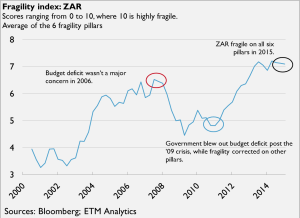 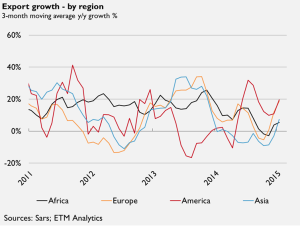 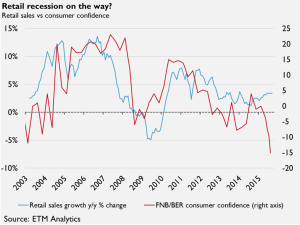 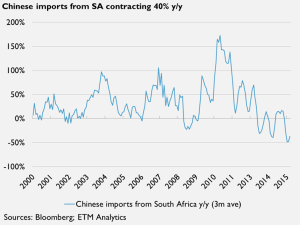