The distribution of higher educational qualifications in South Africa: EAP versus reality

Solidarity Trade Union is widely recognised for its involvement in a number of legal challenges to the prevailing implementation of affirmative action (AA). At its heart, Solidarity’s position opposes a purely mathematical interpretation of AA, where a person’s race carries a disproportionately large weight in decisions of appointment, promotion or laying off of staff.

Taken to the extreme, a purely race-driven mathematical implementation of AA intends to coercively “transform” the social realities of all industries, businesses, institutions and occupational levels to be completely reflective of the national racial demographics.

Sound personnel decisions have to consider a wide range of criteria, including a person’s formal education, training, aptitudes and experience, along with many others. While the present legislative environment does require considerations of race under specified commercial conditions, it is reasonable to assume that race cannot be the only consideration.

It is concluded that a significant mismatch exists between the EAP and the distribution of higher educational qualifications. This mismatch supports the notion that race cannot be the only deciding variable in proper personnel decisions.

Mathematical AA and the national EAP

The EAP refers to people of working age, from 15 to 64 years of age who are working, or unemployed people willing, able and seeking to work. Table 1 illustrates the EAP for 2015 Q2. In 2015 Q2 around 21,1 million people were considered part of the national labour force.

A coercive mathematical implementation of AA targets in line with the race proportions of the national EAP would aspire that every sphere of the local working world reflect the above percentages.

How many educational qualifications are available to the labour force?

The racial distribution of the qualifications higher than Grade 12 deviates significantly from the racial proportions of the EAP. Table 2 and Figure 1 illustrate the differences for higher qualifications including certificates, diplomas, degrees and higher degrees. Table 3 presents the underlying calculations.

Compared to the other race groups, the White and Indian/Asian population groupings represent a significantly larger proportion of formal higher qualifications than their proportional racial representation in the EAP.

Such a mismatch presents a significant problem to designated employers who have to weigh the availability of people with the required formal educational qualifications with AA race targets. Government mandating racial representation in line with the EAP as an increasingly deciding variable under these conditions could bring forth a number of harmful consequences.

All of these outcomes may create a situation where much-needed skills and expertise do not flow in the economy where they are required. This is highly damaging to business productivity and the delivery of public services, and on a wide enough scale could be detrimental to the economy as a whole. 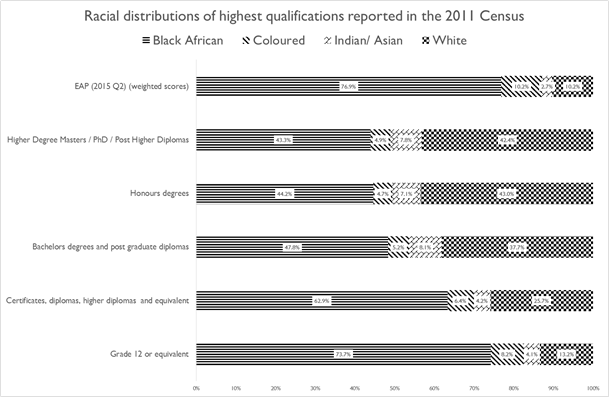 A person’s level of educational achievement is an important variable typically considered highly relevant in personnel decisions. In South Africa, this attribute is not racially distributed according to the racial proportions of the EAP and a mismatch clearly exists between the EAP and the distribution of higher qualifications.

Ignoring the underlying realities of the workforce and the distribution of educational qualifications in favour of increasingly coercive mathematical AA targets, is likely to compound inefficiencies and spur on damaging consequences. Of these, the likely increases in underemployment, inefficient service delivery, and the emigration of well-educated people are especially worrisome. 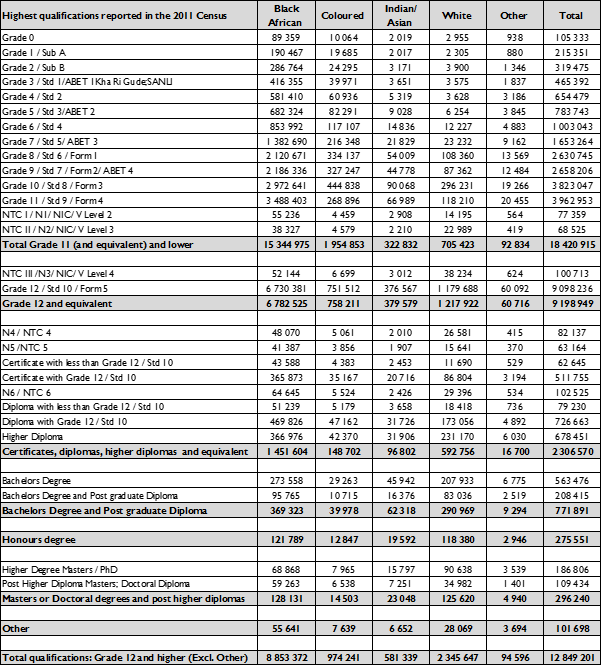 [1] The absolute totals of completed highest qualifications must be interpreted with caution. The forces of supply and demand differ among various qualifications and change continually. Without proper context it is impossible to say whether there are too many or too few of a specific category of qualifications. Such estimations fall outside the scope of this discussion.