The failed policies of the South African government’s economic cluster

Since the 2008/09 global financial crisis, ANC policy makers, most notably minister of Trade and Industry Rob Davies, have made a concerted effort to point out that the crisis demonstrated the failure of “Western capitalism” and opened the way for a more state-led development path. Under the Zuma administration, which – as fate would have it – commenced during this global economic slump, the term “developmental state” gained prominence. This began finding expression in waves of new policy documents, including the New Growth Path (NGP), the Industrial Policy Action Plans (IPAP), and the much-lauded National Development Plan (NDP). These documents, among numerous others, envision a grand, state-led economic central planning scheme to raise growth and eradicate poverty.

The architects certainly had high hopes for their plans. South Africans were promised high growth, mass job creation, a short-lived budget deficit, and falling inequality. Instead growth was dismal, the narrow unemployment rate stayed at an eye-watering 25%, the national debt ballooned far beyond expectations (forcing credit downgrades), and the evidence suggests that income inequality remains high.

The rand recovered in 2009 and 2010, partly due to dollar weakness, cyclically low inflation, and a growth spurt related to the FIFA World Cup. But the currency peaked in 2011 and has lost around 60% of its value since then.

As we pointed out in the previous edition of the LMR, by numerous key measures South Africa’s economy is performing miserably.

Inflation-adjusted GDP per capita has been falling since 2013 and has remained stagnant since 2007. This contrasts with the previous 8-year period from 1999–2007 in which per capita real GDP increased by 26%.

In short, the economic cluster’s current policies are an emphatic failure. In response to criticism the ministers in charge have resorted to the same excuse. They claim the weak global economy since 2009 is to blame, not their policies.

The major economies of the world have indeed experienced a tepid recovery since 2009. Europe in particular has been beset by lingering fiscal crises and its own policy dysfunction that scuppered any hopes of a meaningful recovery. The UK and the US took a number of years after 2009 to escape recession risk, and China’s economy has been slowing for a number of years now. Two of the other BRICS, Brazil and Russia, are in recession. The global macro-environment has also led to a commodity price slump, which has become particularly acute since 2014.

According to the World Bank, South Africa’s inflation-adjusted dollar-denominated GDP per capita increased 3% from 2007 to 2014. Over that period the same measure for Botswana was up 18%, Chile 19%, Malaysia 22%, Colombia 24%, and Mauritius 28%, to single out just a few. In fact, among major emerging markets, South Africa’s performance is right near the bottom of the pile. 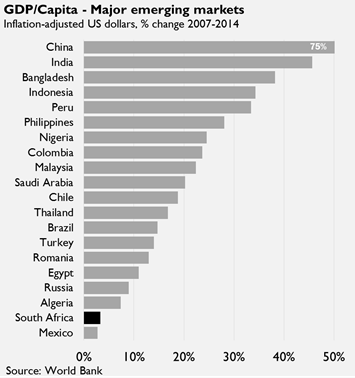 It is argued that South Africa’s high income inequality poses unique challenges and is a barrier to growth. This is also used as a justification for income and wealth transfer policies. Yet there is no discernibly negative effect of high inequality on growth, while similarly high inequality countries (countries with an estimated Gini coefficient greater than 0.5) have again strongly outperformed South Africa.

One might also point to the slump in metal prices as a cause of drag on SA growth. While this is undoubtedly true, other countries that also produce net metal exports of 10% of GDP or more have comfortably outperformed South Africa. Instead South Africa ranks among those countries that experienced war or civil conflict, coups, or major financial crises. 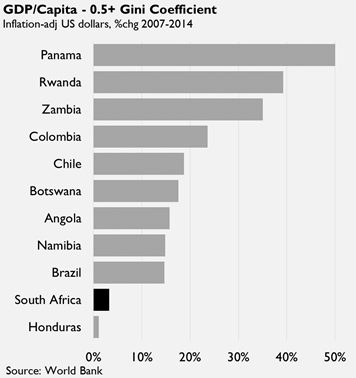 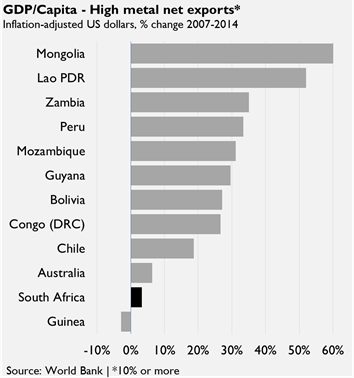 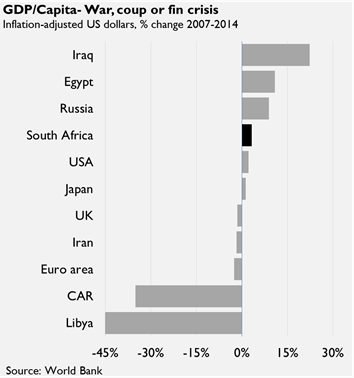 Every country has unique challenges and opportunities. However in South Africa’s case neither high inequality nor commodity exposure is sufficient to explain the poor performance of the South African economy. And weak growth in the major global economies has not hampered many major emerging markets to remotely the same extent as is claimed it has South Africa.

South Africa’s challenge seems to be overcoming anti-business policy, heavy state intervention and excessive regulation. What stands out in South Africa particularly is regulatory uncertainty, threats on property rights, escalating BEE rules, chronic mismanagement of large state-owned companies, and among the most restrictive labour laws in the world. All these problems flow from the developmental state ethos which governs economic policy.

The net result of poor economic growth resulting from bad policy is that tax revenue cannot keep up with government expenditure. As long as growth remains poor, government spending promises high, and policy dysfunctional, South Africa is likely to be downgraded to sub-investment grade or “junk” status by international credit rating agencies.

When assessing what happens to countries when they are downgraded to sub-investment grade, we find that they typically see sharp currency devaluation beforehand, and usually have to endure rapidly rising interest rates, not to mention recessions. Poor macroeconomic management has placed South Africa in a precarious and risky situation.

The global economy is weakening, but that will only expose more clearly how ill-conceived the plans of the South African government’s economic cluster are.